Things to See & Do

The wonderful island of Tenerife is one of Europe’s most popular holiday destinations. The biggest of the Canary Islands, boasts a stunning coastline and an amazing volcanic landscape. There are plenty of things to see and do in Tenerife besides loll on the beach or sweat by a pool.

Things to See in Tenerife

From the parking lot tourists are brought on the volcano by a cable lift which ends at 3550m. To climb the top a special permission is necessary, which can easily be obtained at the island’s capital Santa Cruz de Tenerife. It is worth checking if the cable car is operational before you set off, as it does not run in poor weather conditions. From the top there is an amazing view all over the island. Climbing the top is a hard effort, although the difference is less than 200 metres, but the air is extremely thin. A cold wind fights against the hot sun, which is always there because you are above the clouds! 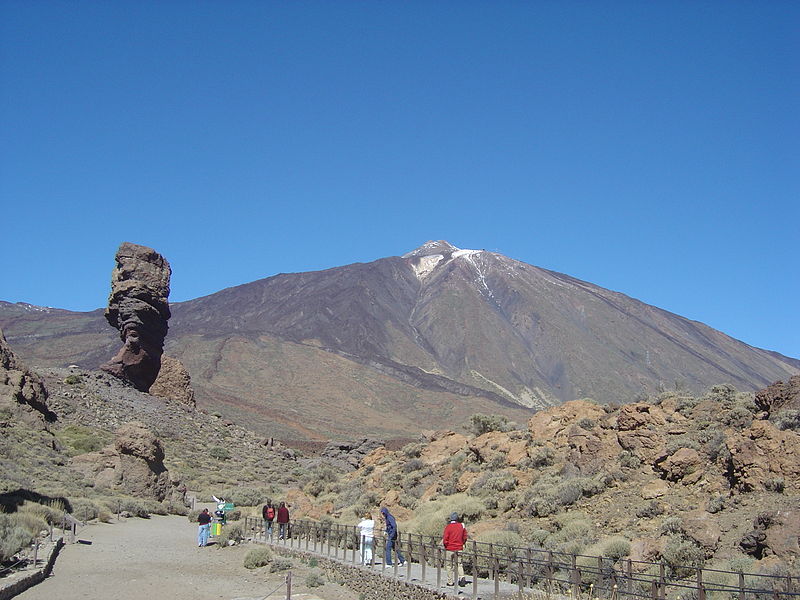 Pico de Teide with a rock formation called “Gods finger” in the forground. Photo by Timolli

This adds a lot of natural beauty as well as sport to the island. It also gives you that wonderful option during ‘winter’, when you find days where you can drive to the mountain and have a snow fight, return to the south and sun bathe in the sun, swim in the sea, all in the space of two hours.

Warning: No matter how hot it is on the beaches below, a trip to Teide or even just the National Park can be very cold, and in winter can even mean a few feet of snow and an ice cold wind blowing so take some warm clothes.

The small resort of Los Gigantes has one of the most stunning backdrops of any town on Tenerife, the ancient and dramatic mountain range which rises from the sea beside the resort and after which it’s named – “The Giants”. The dominant cliff face of the seven million year old Teno Mountains is visible from almost anywhere you stroll around town and it’s impossible to ignore their breathtaking beauty. 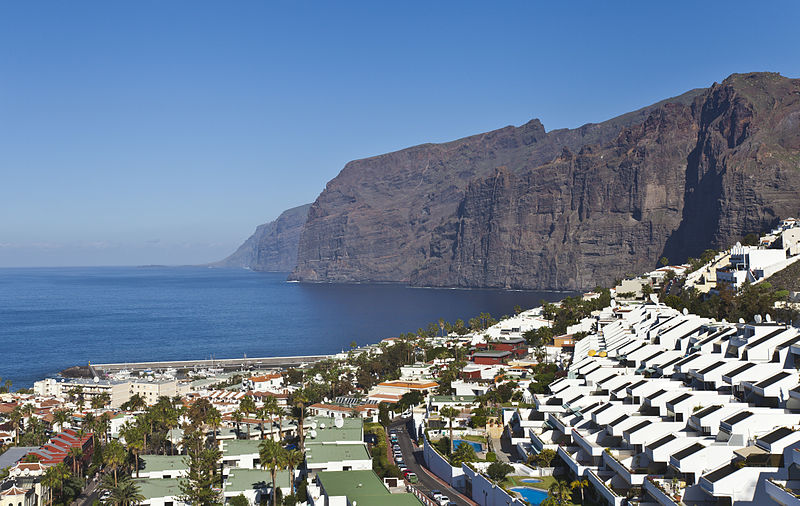 There are some wonderful drives all around the island. There are long winding mountain roads with breathtaking scenery.
Cycling is hard to do casually although bikes are available to rent, the coastal roads are busy and there is little room for bikes except often in the gutter. However if you like cycling up hills there are plenty of steep roads to climb as soon as you leave the coastline. For those less fit, one tour company offers a car trip to the top of El Teide with a cycle down, no peddling required.
Karting Club Tenerife – Go carts and motor bikes are raced in the main track and two sizes of cart on the kit track. Located close to Playa de las Américas free bus service from and back to your hotel. 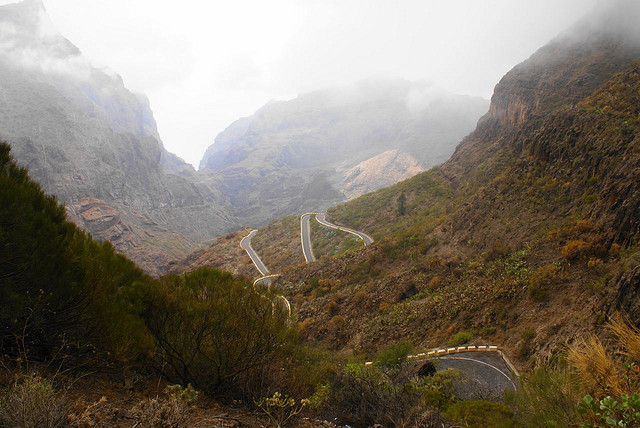 There are good attraction parks, Loro Parque for instance, in just outside the northern city of Puerto de la Cruz, which is an animal protection foundation as well as a huge animal park. Jungle Park close to the area of Los Cristianos is well worth a visit, the bird of prey show is a must. There are free bus links to the park, but getting on one to get back is not much fun!

Flamingos at Loro Park. Photo by Olaf A. Koch

Things to Do in Tenerife

Tenerife is a favoured destination for scuba divers, with numerous dive operations of all qualities and nationalities. The waters round the island are diveable throughout the year, with the temperature varying between 18 degrees in January to around 25-26 degrees in August.

Of course many visitors just want to spend their time on a beach or by the hotel swimming pool. If a good beach is what you are looking for, then Playa de las Teresitas, or Las Teresitas beach in Tenerife’s north is said, with very good reason, to be the best the island has to offer. Playa de las Americas beach is black volcanic sand but Los Cristianos is yellow imported sand. The black sand feels the same as the yellow but is not as pleasing to look at to many. Beaches often have sun-loungers with parasols available to hire for the day, but if you are doing this for a few days it is probably better to just buy a parasol and some beach mats. 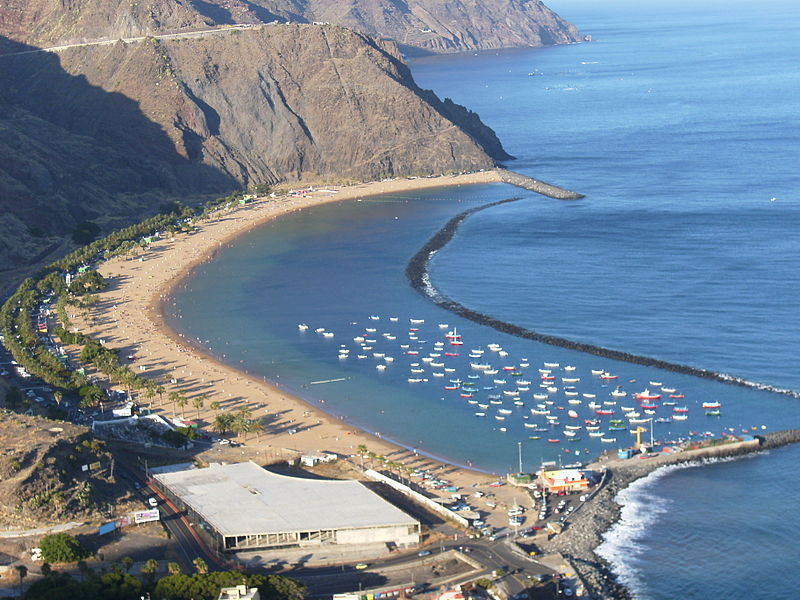 Tenerife has a number of mysterious pyramids, most of which are in the town of Güímar. The Pyramids of Güímar are one of the island’s many mysteries and resemble similar structures in both Mexico and Peru, with six angular stone steps.

Tenerife is an excellent destination for hiking. There are routes for anyone, from leisurely one hour strolls to extremely strenuous full day hikes in demanding terrain with either a huge ascent, descent or both. There are several books describing hiking routes, such as two Landscapes of Tenerife books from Sunflower Books, one covering the northern side and the other covering the southern side. It’s a good idea to get a guide book before you go to Tenerife, as they might be difficult to find there.

The Barranco Del Infierno (Hell’s Gorge) is a ravine located in the town of Adeje in the south of the island. A popular hiking trail leads through the ravine to the highest waterfall on Tenerife. Access to the gorge is controlled by a limitation on the number of daily visitors (actually 200 per day). The area is very important archaeologically, since there are hundreds of caves that were home to many aboriginal Guanches, as well as caves with engravings. The largest collection of Guanche mummies and utensils were found here and placed in the Museum of Nature and Man of Santa Cruz de Tenerife.

Visit the beautiful old towns of La Orotava and La Laguna, the latter being a UNESCO World Heritage Site. Santa Cruz has a number of museums and an art gallery. There is also a space museum and planetarium on a small scale near La Laguna.

Visit the picturesque village of Masca. This beautiful little village may be somewhat difficult to reach but it is well worth the journey, which takes you through deep ravines interlaced with lush green flora and winding roads with hairpin bends.

Located on the western tip of the island, Punta Del Teno is one of the favorite destinations for travellers. With good weather and clear skies from here you have a spectacular view of the neighboring island of La Gomera.

In the upmarket district of La Paz, the beautiful Botanical Gardens (Jardin Botanico) is home to over 5,000 exotic tree and plant species from all across the globe. The gardens are a tranquil leafy oasis with all sorts of unusual plants to discover. Look out for the sausage and drunken trees and the 200 year old fig tree, said to swallow tourists who are accidentally locked in.
The Palmetum of Santa Cruz de Tenerife is a park divided in “biogeographical sections” and includes a large system of waterfalls, streams and ponds, an ethnographical museum dedicated to palms, and a display shade house. It is the theme park with the largest collection of palm trees in Europe.

There are markets all over Tenerife, some very local in flavour and others like the huge Sunday market in Los Crisitanos, geared very much to tourists. Santa Cruz has also a big market by the station on Sunday mornings, and Las Americas has one Thursday and Saturday.

In February there is a huge fancy dress parade by locals which is said to be third in size after Rio and Notting Hill carnivals.